People's reactions have been interesting. From reacting to the amount of green in the place to comments like "you are doing it all yourself? ...that's brave" (which always leaves me with a sense of apprehension), to the older asian man who came up to me in the line-up in Rona while we were buying noise-dampening underlay and checking out the laminate cutter to ask what it was we were buying and asked how we could have learned so much about installing flooring. When I told him we were learning as we went along, he said: "you've taught me something today".

What I don't think many people have really understood is how much time it is taking up to pack, move packed things, plan what to move, buy materials, move building materials into condo, install materials, deal with two bureaucratic bodies in two housing complexes, book trucks/cars, pick up trucks/cars, recruit some volunteer labour, paint , arrange for a visit from the pest control company during business hours...the list goes on. All of which we have done in the evenings while working full-time days. We get home around 9-10, feed the poor kitties that have been awaiting our arrival and watch the news before falling asleep on the couch before dragging ourselves to bed.

Yesterday, on our way to pick up the nearest pickup truck (conveniently located next to nothing central or any form of rapid transit), Lisa and I both got stuck at work after hours for various reasons, waited for the arrival of a bus that supposedly runs every 8 minutes for almost half an hour, only to have the bus driver turn down a street that had no trolley lines and lose his electrical connections and have to exit the bus with everyone else and catch another that sort of went in the same direction and walk an additional 8-10 blocks to the car which was booked for 40 minutes before we arrived. We barely had enough time to run our flooring purchase errand in Richmond and unload the rather heavy boxes into the bedrooms to acclimatize to their new environment for 48 hours, so the boards don't warp or split when installed.

On the way home, we realized how little time remains and how much there is left to do. It seems a daunting task indeed, especially when you factor in how much we need to get done in both places before we can move the rest of the stuff.

But, I want to leave off with some of our successes that hopefully make all the stress and aching muscles worth it. Wait'll the new flooring is in place, then you'll really see the difference. 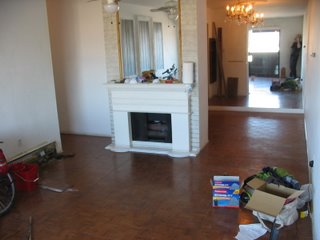 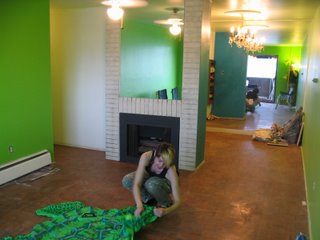 Posted by Lisa Corriveau at 2:21 PM