The move from hell is over.

I think I've said those words more than once, & not just this time. Every time has been horrible. Moving is one of the most stressful experiences, next to divorce & death of a family member. I think this time has definitely convinced me that I need to hire movers next time. My wrists were injured in late February from a stilting fall & this move has aggravated them again. Opening heavy doors, carrying stacks of textbooks & boxes of stuff are a major strain on my poor skinny little joints. My knees fared better, luckily.

Last night we got the last carload of stuff in here & started unpacking. I got the bathroom mostly sorted out & Oliver rearranged the office somewhat so there's now room to use the computer.

The kitchen will be a monumental task--where should we put stuff? But more importantly, where will stuff fit? I think we have less cupboard space that our last place, which wasn't enough. Until we renovate, anyway. I plan to carefully plot out the kitchen refit to eke every possible square centimetre of storage out of the space that we have. 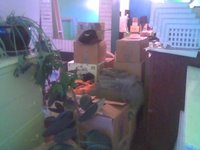 The whole apartment is going to be a work in progress for quite a while...