I read an article in a renovating magazine that advised spending a large portion of the reno budget on furniture. The theory goes that it will improve the appearance of your home & thus the resale value. Then you get to take the furniture with you when you go! This just makes me lean farther towards buying a 'Wassily Chair' or two. 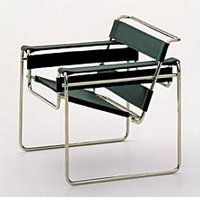 They retail at about $1200. Expensive, but I know I won't get sick of it--I've loved these chairs since I was in high school. It's a classic, designed by Marcel Breuer in 1925 for his friend Wassily Kandinsky. The design of tubular steel & leather straps is said to have been inspired by Breuer's Adler bicycle. I love it because it looks to me like a drawing of a chair--nearly invisible in terms of how much space it seems to occupy. A nice feature in a condo. I also think that it might work well with cats & kids. My theory is that the cats won't really sit on it much because it doesn't have a level seat & it's somewhat slippery. Kids couldn't really do much to it either--there's no fabric to stain & they could use it to pull themselves up as they're learning to walk, or crawl right through it.
Whatever new furniture we buy, I'm enjoying purging the old stuff. There's so much hand-me-down furniture in this place that I don't like & actually have never really liked. We put up an ad in the co-op lobby & Oliver's been posting all the stuff on Craig's List. So far we've found homes for some shelving, a tv stand & some old computers. There are still a few things we need to ditch, like the futon couch, more shelving, a coffee table, half a dozen end tables... It feels good to be starting new in the place we've bought.
Posted by Lisa Corriveau at 2:52 PM

hey lisa :-)
hope you're feeling better!
anyways, a friend of mine is moving into a new place and desperately needs furniture. she might want your futon...
can i give her your number?
laura :-)

Hi Laura,
Sorry, the futon found a home with a neighbor... as much as I'd like to help your friend, convenience won...